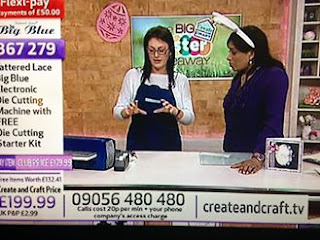 First of all, a massive and heartfelt Thank You to everyone who took the time to send messages of support and words of encouragement ahead of my first shows on Create and Craft over the Easter weekend. The shows were great fun and I was looked after unbelievably well by the lovely people in Create and Craft TV land. I did five shows over the weekend and the early part of last week. I was bowled over by the fantastic feedback I received. I had a ball, even though I was unwell during one of the shows - but just minutes later, I was fine!

I didn't post an update straight away as I first needed to speak to the guys back at Crafting.co.uk and Tattered Lace and listen to how the experts felt the shows had gone. I had a very positive meeting on Tuesday in which we looked at a plan for the next few months which will allow me to gain lots more experience of being in front of the cameras. 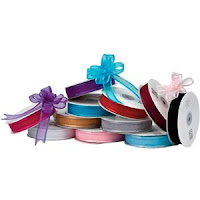 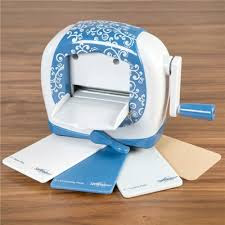 I've been asked to go back tomorrow (Saturday 8th April) at noon to present a Sapphire die cutting machine 60 minute Craftdown show. Later on at 5pm I'll be presenting a Ribbons Galore 60 minute craftdown show with the wonderful Bow maker, in which we'll be showcasing some fantastic deals on ribbon. I hope you can find time to watch!

Just to keep you up to date I'll be doing some shows on Sunday 17th April introducing the new Tattered Lace 'Tuck in' dies, along with some other fantastic new dies. These are a brilliant new range of dies that add so much dimension and texture to our cards. I feel excited and privileged to be able to present these new dies so soon after their launch. No time for a rest after that though - I'm being kept really busy as I'll be coming up with some new ideas for demonstrations which I'll be presenting on Sunday 24th April when I'll be doing some Border Embossing folder shows! As showtime draws nearer I'll try to give you a sneaky peak on this blog of the sort of stuff I've come up with.

I'd better go now as I still have lots to do before tomorrow. But thanks once again for your kind words and support, your messages mean so much to me. I'll post again soon with some card pictures that hopefully you'll find interesting.

Thanks for popping by,

Posted by Corrine's Paper Crafts at 18:44