It's often the case that the calendar dictates what sort of cards we make, and when we make them, and Valentine's Day is a good example. I couldn't share this Valentine's Day card with you before now because my husband reads my blog!  That was a little frustrating, but never mind...

Still, perhaps it might give you some ideas for next year's Valentine's Day - or you could always adapt it when you need a card for that special occasion, such as an anniversary.

Its a very simple card but I felt it was effective - and my husband must have thought so too, because he was bowled over when he opened the envelope.

I don't know why but I always regard red and white as being the 'traditional' Valentine's Day colours, so I kept to those.  By embossing one white layer I was able to lift the card by giving it added dimension, which I felt gave it some additional interest. 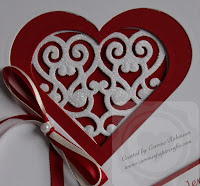 I used more layers than I normally would but it gave depth to an otherwise flat card. I graduated the layers by just 0.5cm at a time. It also meant that I was able to be economical with my card stock and cut some of the smaller layers out of the bigger ones - as the next layer hid the gap and stopped the card becoming too heavy. The filigree heart at the centre was cut out with a layer of 'Stick it' so that I could add my usual glitter.

I know that many people who make cards struggle when they try to decide what to write in the card.  It's not surprising really - if you've been with someone for over 20 years it can be hard to come up with some loving words you've not used before.  My advice is, don't panic, and write truthfully from the heart.  You can spend days coming up with a clever verse but often those three little words 'I Love You' speak volumes... Alternatively Google is a wonderful tool!¬

I hope you like this simple card and, as always, I'd love to read your comments.

Thanks for popping by

Posted by Corrine's Paper Crafts at 19:48