I don’t know where the time goes, but suddenly it’s that time of the year again!

I want to share with you a Christmas card about which I’ve had a lot of very positive feedback.  I should apologise for the length of this blog entry right now - but I want to include detailed instructions for you, in case you want to make the card yourself.

I have great fun making this card because it lets me combine two passions of mine – die cutting and the marvellous Scan N Cut.

The base of the card is a piece of A4 card simply folded in half, which means the dimensions are 21cm X 14.8cm.  The matts and layers are simple, and of course you can use any Christmas papers you happen to have lying around.  The largest two layers in my version, the red and the patterned layers, are assembled using double sided tape.  The craft card, which measures 18.5cm X 10.5cm, is attached using foam tape to add dimension with the white layer 'flat' on top of it.

At this stage the fun begins! Using my Brother Scan N Cut machine I made the 'NOEL' sentiment.

Then I added each letter separately... 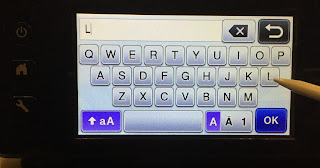 If I'd typed the whole word in at the same time, then all the letters would increase or decrease at the same rate.  Obviously this is an incredibly useful feature to have most of the time... but not on this occasion!

When I was certain I had all the letter bases level I grouped them together, like this: 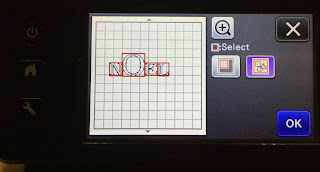 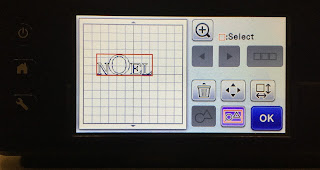 Re-sized to fit the letters: 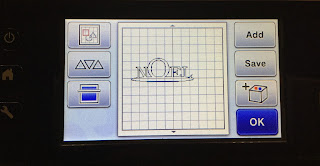 The Christmas Pudding shown in the picture below was made using the Tattered Lace Essentials Christmas Pudding Dies.  It was die cut four times from card stock; two in craft and one each in green and in white. 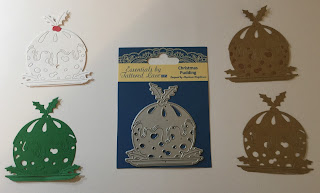 For no particular reason other than I didn't want to waste card, I decided to colour the holly berries using a red pen.

I pushed all the waste parts out of three of the die cuts but put tape behind one of the craft card puddings to hold in the bits before I coloured in the fruity bits in the pudding a darker brown.

The pudding fits snugly over the letter 'O' in 'NOEL' and goes on to the card base using either some gems or pearl drops in the corners.

And there you have it - a fab, fun card which I love making.  If you had a go I hope you enjoyed it as much as I did!

Posted by Corrine's Paper Crafts at 11:01