Fun In The Wee Small Hours…

On Monday 8th November I was absolutely thrilled to be invited to take part in recording some videos to accompany the projects in issue 36 of the Tattered Lace magazine. I must admit I quickly became slightly less thrilled when it was explained to me that filming would take place late in the evening and would go on until the early hours of the morning when all sensible people everywhere should be tucked up snug and warm in their beds! I am definitely not a night owl – when ten o’clock strikes my eyelids automatically become heavy – and I thought I might end up falling asleep in front of the cameras.  Filming is done overnight as it is the only time the studio is available. As it happens I had nothing to worry about, as the adrenalin and concentration is so great that thoughts of a snooze never entered my head – honest!

This was to be the second time I’d done this kind of filming and I was really excited to be going back to do some more.

The lovely Lou Collins and I recorded 30 videos between us for the magazine projects.  The aim was to keep the videos short and snappy, under five minutes long, but some necessarily had to be longer than that.  Potentially this could have taken a very long time, especially as everyone involved was naturally determined to make them as perfect as possible.  All of Lou’s videos were shot in one take and I had to re-shoot just one of mine, due to a technical fault with my microphone. That’s what I call professional!

The format of the videos is lovely and simple. There‘s a ‘sting’ at the start of the video, then a single take of the presenter demonstrating the techniques used in that project, followed by another ‘sting’ at the end.  (A sting is simply some brief graphics and music). If you are already a subscriber all this months videos will be available in the Subscribers’ Exclusive Content on the Create and Craft website from the 16th November for you to watch. The lovely thing about them is that we can go into much finer detail about the techniques used than we ever have time for on the live shows.

I really enjoy filming these even though they are vastly different to the live TV I usually do.  One challenge for me is to get used to ‘talkback’; that’s an earpiece through which I can hear the Producer and the Director. They frequently talk to me while I am talking to the camera and working on the project, all at the same time.  It’s a bit like trying to rub your stomach with one hand while patting your head with the other!  I find it really tempting to talk back to the Producer and Director – but that wouldn’t make any sense to the viewer! 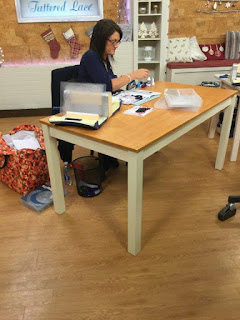 I’m not complaining though - Emily the Producer and Stuart the Director give me marvellous support through talkback.  They give me additional information I can pass on to the viewer, they tell me how and where to hold up various parts of the project to get the best camera angles, and generally work wonders in a calm and professional matter to get the very best out of me and my presentation.

For me my biggest triumph of the whole exercise was successfully managing to do the folding project in a single take after a lot of practice beforehand – I’ve never been very good at Origami!

And when filming was all done and dusted and I could relax, the tiredness hit me like a wave.  I arrived home at 4am – not even the milkman was around at that time of day – and I went straight to bed.  But I’d had a great few hours in front of the cameras and I hope I’m invited back to do another set very soon.

Oh, and while I’m typing I’d just like to mention that the annual launch of the Tattered Lace magazine subscription starts on 14th November.  Stephanie and Nancy are doing the initial shows introducing the next subscription, showcasing the magazine and the free dies, and I’m doing subscription shows too, on the 18th and 20th November.

Whether you're already a subscriber to the Tattered Lace magazine and would like to renew your subscription, or you want to become a first time subscriber, I hope you can join us!

Posted by Corrine's Paper Crafts at 17:04