Beauty And The Beast

I don’t want to complain – I love my job and I realise I’m very lucky to be able to do what I do – but I’ve been very busy as of late.  By close of play today (Wednesday) I’ll have done nine TV shows (or is it eight? I’m confused!) in just three days.  While that might not seem very much (after all, a show is only an hour long) eight or nine shows means I’ve had to do an incredibly massive amount of preparation work – ‘prep’ work for them… these shows don’t run smoothly all by themselves (and sometimes they don’t run smoothly at all, but that’s the joy of live television!)  I’ve been so busy that I haven’t seen hubby since Monday morning and I won’t see him again until this evening.  And talk about ‘hot off the press’ – I’m writing this just minutes after coming off air from the Tuesday evening 9pm show with the lovely Martyn Parker.

But I want to talk to you about the subject of the show I’ve just done – Beauty and the Beast – and to show you some cards I made based on that theme.  Sadly I can’t use my lovely light box to take the photos because I’m in a hotel room – but hopefully you’ll get the general idea. 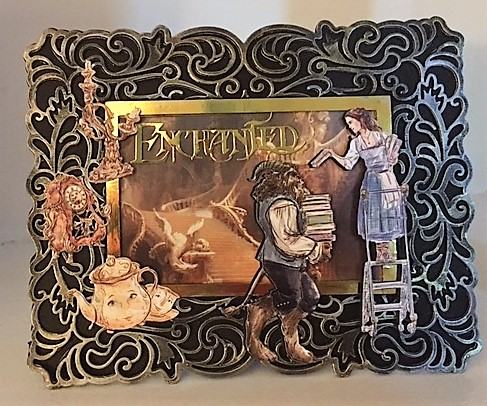 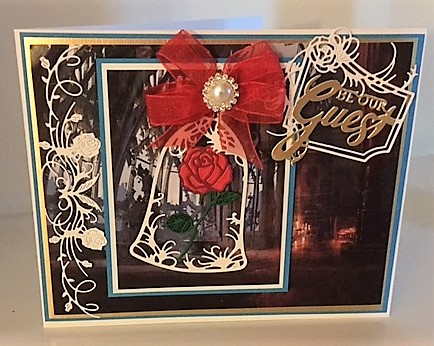 As we launched Beauty and the Beast some time ago, the show I’ve just done was able to offer some really good discounts on the Beauty and the Beast range… and it was REALLY popular.  So much so that just a few minutes into Tuesday’s 9pm show we heard that 50% of the stock allocated at the reduced price had already flown off the shelves.

We are so lucky to be able to bring you Disney licensed products. When introducing the Beauty and the Beast Theatrical A Romance Beyond Words Limited Edition, Martyn explained the concept of ‘Limited Edition’ as far as the Disney products are concerned.  It sounds a little stark, but there is a finite amount of these Limited Edition products and dies, and when they’re gone, they’re gone – it’s not a case of us having a word with the buyer to see if we can get more stock in for tomorrow; they only make a certain amount and then they destroy the mould.  Sounds harsh, but then again doing that makes these products quite collectable in their own way. 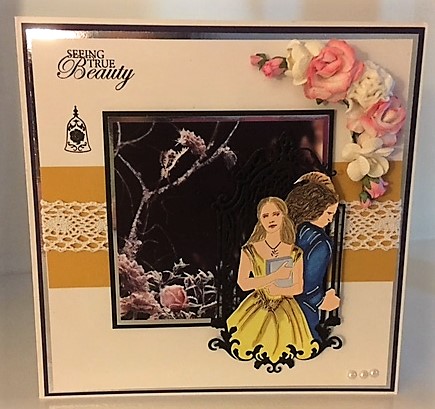 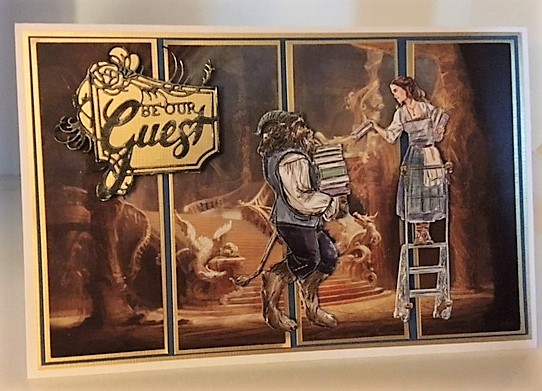 On a personal note, I feel a special affinity with Disney’s Beauty and the Beast because I have many fond memories of cuddling up with my eldest daughter when she was about four years old in front of the TV to watch the movie. She and I used to love watching that, over and over again.  She used to be absolutely terrified of the Beast but still insisted on watching it!  Beauty and the Beast was her introduction to the world of Disney.


I always love to hear from viewers, and one lady emailed in to say she’d gone to watch the Beauty and the Beast movie with her Mum, her daughter and her granddaughter… no less than four generations all eager to see that movie – and that’s a shining example of the enduring appeal of Disney!

Posted by Corrine's Paper Crafts at 05:19