Peek Of The Week - First Class!

I’m really sorry there was no blog entry last Friday, but I had a prior engagement I wouldn’t have missed for the World. There was no time to write and upload a blog. When my alarm went off at half past five in the morning hubby and I had to leap out of bed, get ready, put our glad rags on and head off to the railway station as we had a very early train to catch to London.

The reason for the excitement?  Last Friday was Graduation Day for our son Kern.  He’s finished a three year degree course studying English Literature at Greenwich University. I hope he won’t be too embarrassed when I say he’s worked really hard, put long hours into his studies, and reaped the reward of achieving a First Class Honours Degree!  It’s a superb achievement and for once I am lost for words when I try to express just how proud I am of him.

Celebrations were definitely the order of the day, which would involve my favourite tipple of Shiraz, and that meant forgetting about driving and instead catching the bus to the railway station at a time when most people were going to work.  Hubby and I felt very self conscious – him wearing his new suit, me dressed up to the nines, looking totally out of place on a crowded bus!

The train journey was nice and uneventful, and once in St Pancras we had to head across London to Greenwich.  London was the usual noisy, dusty, overcrowded jostling place it always is. I believe my attitude to London is shared by most of us who don’t live there – which is, it’s nice, even exciting, to spend a short time down there getting up to anything and everything you don’t see in provincial cities… but it’s nice, really nice, to get back to the relative peace and quiet of home. London is great in moderation, but maybe I’m too old to enjoy the relentless pace of actually living there full time.

Greenwich University uses the very impressive Royal Naval College, and the graduation ceremony was held in the beautiful chapel – the chapel of St Peter and St Paul. I won’t waste words trying to impress upon you just how breathtaking this building is; instead I’ll just upload a photograph and you’ll get the general idea! 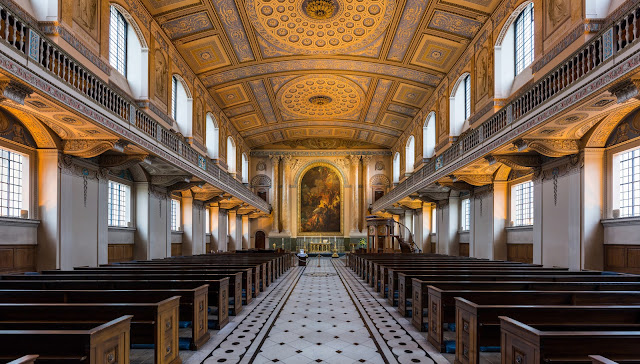 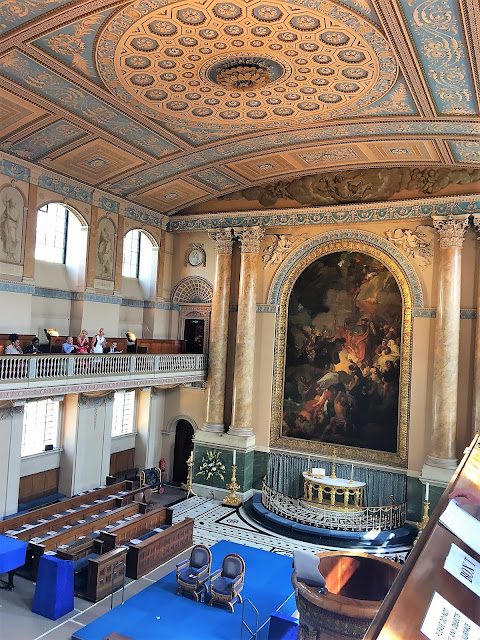 After a combination of the Tube and District Light Railway we met up with Kern, thanks to copious use of mobile phones – it struck me just how difficult this kind of meeting up must have been before mobiles were invented! He went in to get fitted for his gown and mortar board and then it was time to join the queue to have his photo taken holding a scroll. Shortly after it was time for Hubby and I to decide how many photos of this once in a lifetime achievement we wanted – what a lovely problem to have!

Kern’s partner, a lovely lady called Hannah, joined us, and we thought it a great shame that she couldn’t join us for the actual ceremony – due to the size of the venue and the amount of students there, tickets were limited to just two each. Fortunately she met up with a friend and spent the time shopping and having coffee, then met up with us afterwards.

At last it was time to go in, and we joined the queue, clutching our tickets. For a reason that was never explained to us, we were ushered upstairs into a box rather than sit on a pew on the ground floor.  This gave us something of a strange, birds eye view of events…

Anyway, there’s lots of pomp and circumstance and ceremony to these occasions, and it does add a great deal to the whole presentation. At the start there was organ music then no less than three ‘processions’ – a procession of academic staff, then a procession of civic dignitaries headed by the Mayor, then finally the Chancellor, Pro Chancellor and the Vice-Chancellor’s procession.  When these were all seated, it was time for the speeches.  I won’t lie, I think everyone there was so keen to see their son or daughter receive their degree that not much attention was paid to most of the speeches – although I was smiling at the speech by the Pro Chancellor – a chap I would guess is on the wrong side of seventy - when he explained he had come from a poor background and was honest enough to admit he spent far too much of his time at university in the bar but had somehow still managed to make something of himself.  A lesson for all of us there I think!! 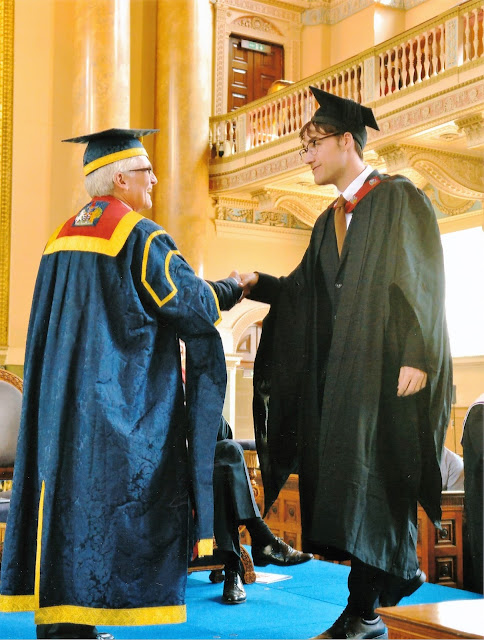 At last the great moment arrived, a massive procession of students going up on stage to receive their degrees.  Hubby let out an almighty shout of celebration when it was Kern’s turn.  I don’t mind admitting I cried, and Hubby did too - but he's always been a softie anyway where the kids are involved!  It was a fantastic thing to see and I felt so privileged to be there. At the end the Chancellor officially conferred the awards on the students and the end of his short speech was the cue for everyone to whoop and holler and basically raise the roof to celebrate the end of a marvellous few years of the students’ young lives. 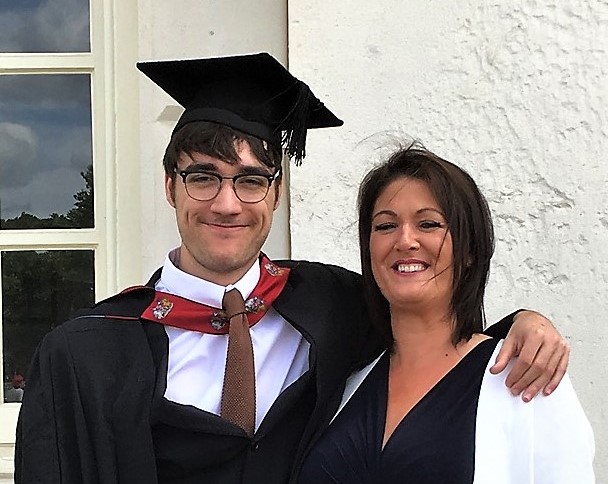 After the dignitaries had left we were ushered out for drinks in a marquee, and that’s when it was time for hubby to marvel at the technology on show; he was amazed that a DVD of the whole proceedings was available to buy just fifteen minutes after the end of the ceremony; and photos were available to buy of each pupil receiving their award ten minutes after the end of proceedings.  Also on sale were lots of Greenwich University souvenirs, ranging from sweatshirts, rugby shirts, tee shirts, mugs, pens, cufflinks, coasters… at this point it would be easy to become cynical and see the whole thing as a money making circus, but to me that would be missing the point; everyone I’ve spoken to says University was the best three years of their life.  Students have made great strides towards finding their place in the World in that time and as such some have developed a great affinity with the place, not to mention the friendships they have made with a vast amount of people.  But from graduation day they might never see their University again, and more importantly might never see their Uni friends again… so it’s only natural that people would want to buy mementos, souvenirs, reminders of this hugely influential time of their lives, so who would want to discourage that? 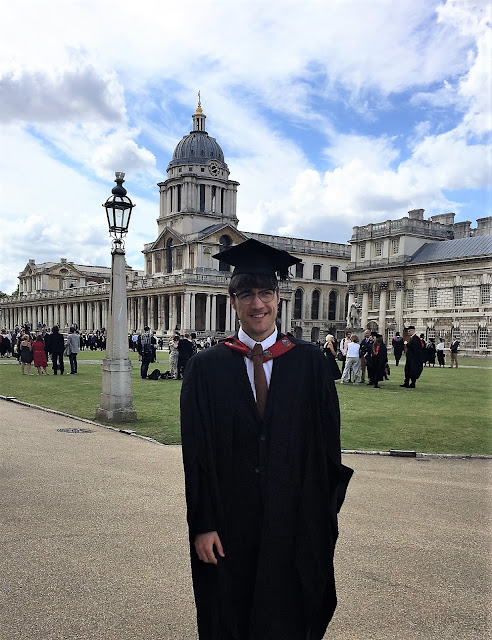 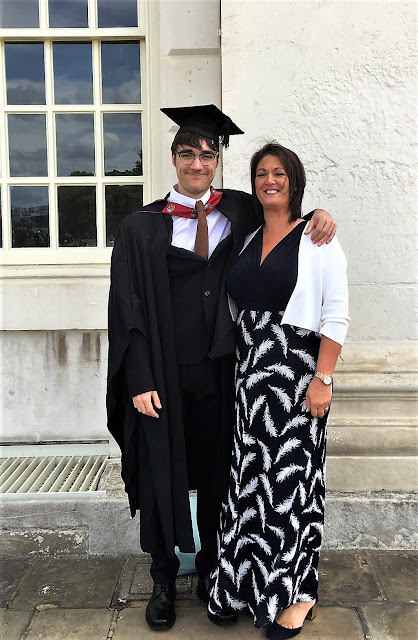 So there was mingling, handshakes, claps on the back, and perhaps some very final conversations.  When we were absolutely sure Kern wanted to leave, it was time to start the celebrations and so we all repaired to The Gypsy Moth pub. 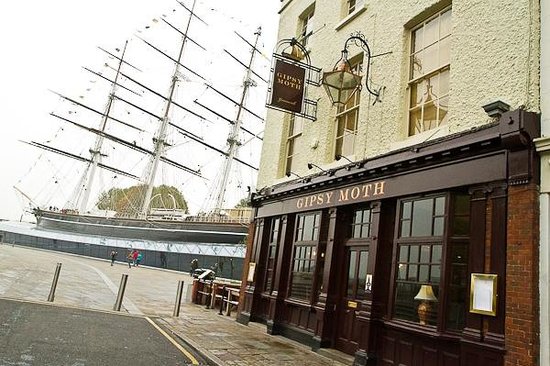 This was a revelation to Hubby, who is an unashamed beer snob, because he had his first ever taste of a beer from America made with Cactus and Grapefruit!  Much more importantly Kern’s twin sister Jessamy was able to join us… she is also studying in London but was delayed because she was unfortunate enough to be selected for Jury Duty!

It was great to be able to kick back with two of three of my children and just have a laugh over a Shiraz or two.  After a while it was time to make the 15 minute journey to The Brookmill, where we had a table booked.  This is a real ‘local’ family pub, Hubby gave the thumbs up to the beer selection, and the food was really good ... not many pubs offer rabbit on their menu, and Jessamy was brave enough to order it and loved it! 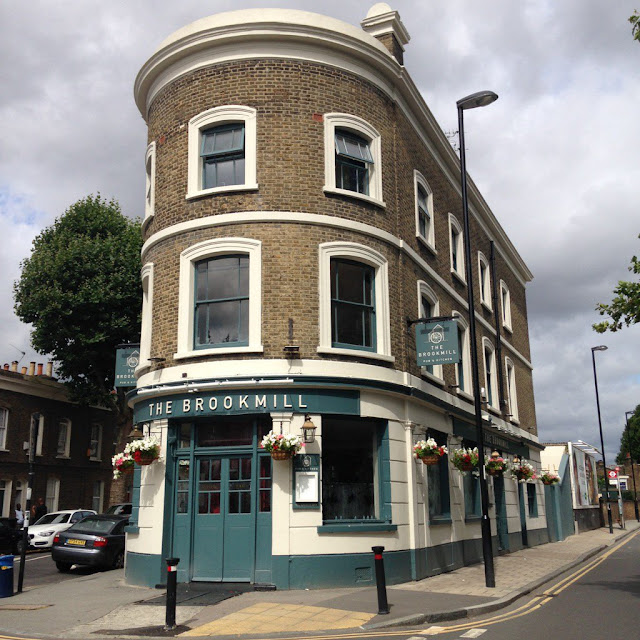 Yet more drinks, yet more laughs, then all too soon it was time for us to say goodbye and start the journey home.  We would have liked to have stayed overnight but hubby had yet another 5.30 alarm call for work on Saturday. I have to report we were still in Celebration Mode when we got on the train, so had yet more red wine!

Back in Nottingham, we treated ourselves to a taxi home.  I think it’s fair to say we fell asleep the moment our head hit the pillow, and how hubby got out of bed at half past five the following morning to get to work on time, I’ll never know.

I’m aware that to some people reading this, they might be bored, and (maybe rightly) think of this as just yet another self-indulgent mother bragging about their offspring. If you’ve read this far, then thank you for sticking with it.  I make no apology for my pride in my son.  Kern hasn’t had things easy; he once had disastrous A level results (he had too many friends and too good a social life to be bothered with study!!!) but he buckled down after that and really got stuck into his studies.  I remember, years ago, him telling me that he would never study English Literature at degree level “because English Literature is for squares.” Years later, here he is, absolutely loving English Literature and picking up a First Class Honours Degree in the subject.  He’s starting his Masters course in September in Creative Writing and can’t wait!

It just goes to show, you never know what Life has in store for you!

Posted by Corrine's Paper Crafts at 12:38