A Nervous Trip to London!

Today’s blog is a departure from anything to do with papercraft, and instead I’d love to talk briefly(?) about my youngest daughter Jessamy.

Regular viewers of Create and Craft will know that I’ve talked a lot (probably far too much, but that’s a proud Mum for you!) about my daughter’s up and coming Final Recital. For the last four years she has been studying music at degree level at a Conservatoire in London, and the Final Recital is the last piece of the jigsaw. She studies the flute as well as the piccolo.

Like all students chasing a degree, the years have flown by and there have been plenty of ups and downs; but at last, she reached the finish line, and the Final Recital took place last Friday. 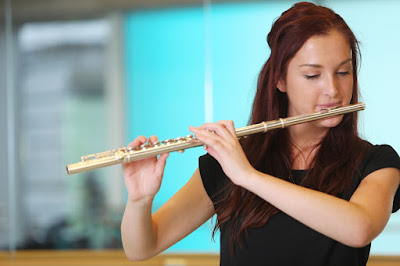 Her brother, my hubby and myself joined a throng of her friends to go and watch it, to give moral support and to constitute the audience that the recital requires.  We were very nervous – my nerves started the night before – so I can’t imagine how nerve wracking it must have been for Jessamy.  And there’s always the thought that her nerves could get the better of her, which of course made us all feel even more tense!

Jessamy had to choose half a dozen flute pieces for the recital which would allow her to display a range of playing, so classical pieces were interspersed with contemporary tunes.  Then in the weeks and months leading up to the recital she had to practice, practice and more practice! She also had to arrange an accompanist, a piano player, and rehearse the pieces with him. If all that wasn’t enough she had to advertise the event on social media, and produce the programme, writing programme notes describing each piece as well as giving a pen picture of the composer, and writing a brief biography of herself. She found that last part particularly difficult – I don’t think anyone likes to write about themselves do they?

The venue was the Old Royal Naval College in Greenwich, a wonderful collection of imposing white buildings.  Many of the rooms in the buildings are practice rooms, and because it was approaching thirty degrees, all the windows were thrown open. While we were walking past the rooms it was fun to be able to hear all the different instruments in each of the rooms – piano, trombone, drums, clarinet, all playing completely different tunes.  To make it even more difficult for the students, a lot of tourists were standing by the open windows staring in at them!  It looked a bit like feeding time at the zoo!

At last the audience were ushered into the room. The three of us managed to get a front row seat.  The panel of judges sat at the back, stern-faced… we found out later that this was the fifth recital they’d heard that day.

As we waited for it to begin I couldn’t help thinking about all the things that could go wrong.  If the room is too cold the flute could keep going out of tune.  If the room was too hot then perspiration could mean the flute could slip away from the chin, and fingers could slip too, resulting in ‘bum’ notes. She could forget parts of the one piece she had to play by memory, not being allowed to see the sheet music. Or, as I mentioned earlier, her nerves could get the better of her.  Or what if the panel were just plain bored or jaded after listening to all those recitals in one day?  It just seems so unfair that so much can hinge on a 45 minute long performance after four years of hard work.

Jessamy walked on to the stage looking lovely in one of her concert dresses, and began to play…

It was marvellous.  The time simply flew by.  The audience clapped enthusiastically after each piece, and hubby told me to clap louder, as loud as possible, in case that persuaded the panel to increase her mark!

Jessamy was buzzing with excitement at the end. As usual she was her own worst critic.  I asked her flute tutor, Anna, how she thought it had gone and she replied that overall it had gone very well and said she believes Jessamy has the potential to get better and better.  Next we asked the accompanist and he said it was “wonderful, amazing”.  Perhaps they were both being polite, or maybe they were being truthful – neither my hubby nor I know enough about music to tell the difference between a good performance and a bad one!  I guess time will tell, and Jessamy doesn’t know when she’ll be getting the results of her assessment! But when I asked Jessamy how she felt it went, she said she'd got this bit wrong, that bit wrong, this bit could have been a lot better... the complete opposite of what the tutor and accompanist had said!

So that signalled the end of her four year course as she walked away from the Old Royal Naval College… but she’ll be back in September to begin her two year Masters course.  We went for a meal to celebrate, and then on to the pub to celebrate a bit more!

Hubby and I stayed in London overnight and met up with the kids again the following morning.  After a very nice café breakfast (Hubby opted for the ‘Big Breakfast’ then complained that he couldn’t move after he’d polished it off!) we went for a walk in Greenwich Park. Later we walked around the Queen’s House at the edge of the park and marvelled at the fantastic staircase.  Then it was back into Greenwich itself where we shopped until we dropped.

It was an eventful train ride home.  First of all a man insisted on going into the First Class carriage and staying there, even though he hadn't paid for a First Class ticket. His argument was that he had paid so much money for his ticket that he felt entitled to sit where he liked.  It was a point of view that the train guard did not share, and only the guard's threat of calling the police persuaded the man to move. During their argument the man told the guard that he had drunk ten pints of lager, which I don't think really helped his cause at all!

Later on hubby noticed that someone who had got off the train at Market Harborough had left a bag behind.  While hubby went off quickly to find the guard, worried that it might be an explosive device of some description with thoughts of the dreadful events in Manchester still firmly in our minds, another chap had no such worries and recklessly opened the bag without a second thought!  It turned out to be a case containing the chap's wallet and laptop, and on going through the wallet the guard noticed that the owner was visiting from Australia - so there was no telephone number to contact him. Nothing for it but to drop it off at Lost Property and hope the Aussie got in touch with the rail company.

A lovely and eventful weekend, lots of nerves at the beginning but lots of laughs (and a couple of nice new dresses from Greenwich Market!!) at the end. I am one very proud Mum.  Well done Jessamy, our favourite musician!

Posted by Corrine's Paper Crafts at 05:23