Some dies are more evocative than others.  When I was asked to demonstrate Rupert Red Setter all sorts of happy childhood memories came flooding back…

When I was about ten years old, more years ago than I care to remember, we had two Red Setters, Copper and Kelly.  Copper was the real character of the two and the one I remember most of all.

Copper was the archetypal Red Setter shape – an arched back, concave stomach and a beautiful shiny coat. No matter how much exercise he got, no matter how many times in a day we would walk him or how far we would walk him, he would always sneak out if one of us had been careless enough to leave the back door open. 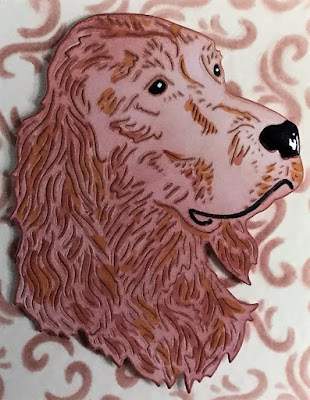 In complete contrast Kelly was fat and lazy. Everything was just too much trouble for Kelly; you could leave the back door open for her and she would just lie down on the door mat and look at the outside world until she nodded off – which was often.

But Copper loved Kelly.  Copper loved Kelly so much that he would get up on his hind legs and reach up and open every door in the house to get to the fridge.  He also worked out pretty quickly how to open the fridge door.  So having opened four or five doors, he would open the fridge door then sit back and watch while Kelly gorged herself on the contents of the fridge. By the time she’d finished the kitchen floor looked like a war zone and my Dad would be beside himself with rage. The strange thing was, with all this free food around, Copper never ate a morsel, choosing instead to leave it all for Kelly.

Poor Dad had to put the door handles on upside down to put an end to Copper’s antics!

So as I said, just one look at the Rupert Red Setter die and all those memories of Copper, and many more besides, came to me with such clarity it felt like it was yesterday. And as it was my brother’s birthday last week there really was only one die I wanted to use on his card! 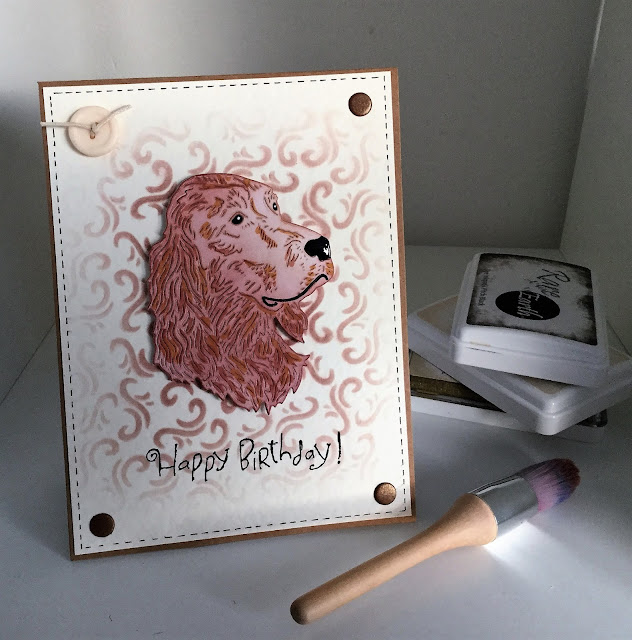 After cutting out the die I used my alcohol pens to add in some of the shading and I used Rare Earth ink pads and Rare Ink brushes to colour in Copper – erm, I mean, Rupert!

I kept the card nice and simple – I used a Rare Earth Mask to create the background, which I attached to a Kraft card base.

My brother rang on his birthday and told me how bowled over he was by the card. The picture on the card, to him as well as me, was Copper…

Posted by Corrine's Paper Crafts at 09:43