It’s Peek Of The Week Day and this time round I’d like to share with you a card I made for a special young man in my life.

My nephew Ayrton was two years old recently.  (I still recall, usually with a shudder, my kids going through their ‘Terrible Twos’, but I decided it’s probably best not to trouble

Ayrton’s parents with those kind of horror stories… just let them go through it for themselves! )

Ayrton is my brother’s second son. Ayrton is a total character, fearless and into everything.  He is absolutely crazy about trucks, trains and tractors, and this is why I chose a tractor motif for his card.

Ayrton’s older brother is Archie, who is almost nine years old.  Ayrton hero worships Archie and follows him around everywhere.  Having a two year old ‘shadow’ could be a source of friction for most kids of his age but thankfully Archie takes it all in his stride and is usually very good and very patient with him.  Not all is perfect harmony though – how could it be with two young lads around?  For instance, Archie is really keen on playing rugby, and he’s of an age when he’s just being taught to tackle.  His parents currently have a full time job trying to persuade him not to use his little brother for tackle practice!

Just listening to all this made me feel quite glad that my own kids are all grown up!

And so to the card. 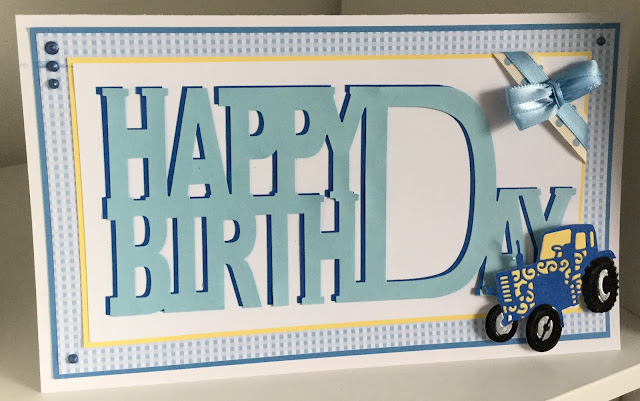 I used the Tattered Lace Happy Birthday Monumental die, and as the name suggests, the card is quite substantial – about 18cm x 29cm. The die itself is really useful – it can be used for males and females and as well as the phrase ‘Happy Birthday’ a nice clever twist is that it includes the words ‘Have’, ‘A’, ‘You’, ‘To’, and ‘Belated’, which I reckon should cover every kind of Birthday situation!

The die can be used as a standalone if you cut two of them out, but I decided instead to stick it on a large card base which I made myself.

I cut the sentiment twice using two contrasting shades of blue to create a drop shadow.  The tractor is a Tattered Lace die, cut out in four colours – blue, yellow, black and silver, and I did a spot of paper piecing to put them all together to create a more three dimensional shape. I used a silver mirri card to create the tyre inners and once I’d added the black tyres I coated them in Glossy Accents to make them shiny.

I realise a card for a two year old is likely to have much more sentimental value to the parents than to Birthday Boy himself, but as they say, it’s the thought that counts. This card is so unlike most of the cards I make in that I’ve deliberately kept it simple, unfussy, and with big bold ‘blocky’ shapes that hopefully might grab a two year old lad's attention at least for a short while.

And come the Great Day, a good time was had by all!

Posted by Corrine's Paper Crafts at 09:28