Last week I actually had a rare day off!

I had no ‘prep’ to do, no blog to write, no emails to answer and no shows to watch… it felt weird! Hubby and I decided to do something we haven’t done in far too many years – we went to town and watched a band.

And we had a great time…

The venue was a little strange.  It was part of an old British Waterways warehouse by the side of a canal, which has been developed and converted into smaller units.  The room itself looks very industrial, with vertical pillars that were huge steel girders.

We didn’t really know what to expect as we’d been there only once before, and that was quite a few years ago.  Hubby gave me one of his despairing looks as he discovered there was no real ale on offer at the bar, but once he’d resigned himself to the notion that he’d be drinking a very nice Shiraz, he perked up!

He asked the lady behind the bar, “Do you have anything resembling real ale?” and was understandably baffled by her enthusiastic nodding as she said, “Yes, we have bottles of cider!”. 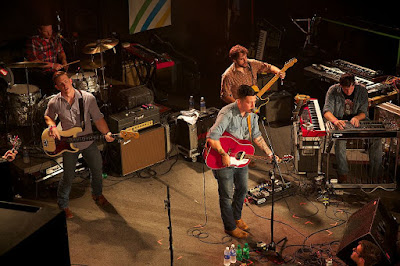 The band in question is called American Aquarium and they hail from Raleigh, North Carolina. Hubby had spotted they were playing there, he read a little about them and was suitably impressed, and bought tickets after watching a few clips of the band online.  The venue’s website officially described their music as ‘Americana’.  I must admit I’m not totally sure what that is but if I had to describe it I would say it’s a bit like The Eagles, but with a much harder edge if you see what I mean.

The driving force behind the band is a really pleasant chap called B J Barham. He spoke to the audience between songs and it’s clear that he certainly has a story to tell.  The band have been on the road for eleven years. Five years ago, he explained, the band were exhausted from constant touring and frustrated because they hadn’t ‘made it’.  They wondered whether they should really be a band.  They even wondered whether they should call themselves musicians.  They decided to quit the music business altogether, but before they did, they decided they would do one last album – an album full of songs about bitterness, and failure, and disillusionment.  That album is called ‘Burn, Flicker, Die’ and was nominated as best Americana album in a prestigious American music awards.  That nomination gave them hope and funds so they could carry on.  As BJ Barham said, “it’s ironic that the record all about not making it is the record that helped us to make it.”

It just goes to show, we should never stop chasing our dreams…

Mr Barham told us a story that had us all laughing, about the friction that exists between him and his father over his chosen career.  Every time he goes home they have the same old conversation.  His father asks him why can't he get a real job like his brother? His brother is a used car salesman, nine to five, six days a week, working in the same town in which he was born.  His father can't understand the basic concept of what his son's band do.  "You mean to tell me that people actually pay money to go and hear you bellyache about your problems?"  "Yes Dad", he always replies rather wearily, "all songwriting is just people bellyaching about their problems..."

The music was as good as the wine!  This being ‘rock n’ roll’, there were no seats, but at least I found a girder I could lean against!  Unfortunately the PA system misbehaved and made a barrage of noises ranging from small poops to a ships’ foghorn.  While the technicians put that right, the band went off stage for a while and Mr Barham treated us to an acoustic set, no microphone, just him and his old guitar.  It was magical stuff.  The crowd were very enthusiastic, although there weren’t many of us.  ‘BJ’ noticed this and with typical humour said, “If there are any young aspiring musicians in the audience, then if you’re lucky, you can spend eleven years constantly touring around Europe and Scandinavia and then you too can hit the peak – you get to spend an evening in an old warehouse playing in front of seventy people!”  Cheers and laughter all round…

At the end of the gig I managed to have a chat with BJ Barham, who turned out to be a really nice charming man.  He’s one of the very few Americans who is a big fan of British food (“it’s great, it’s so heavy, everything is meat and potatoes”, he said), and he’s definitely one of the very few rock band lead singers who goes for a run every morning!

Although it was a great night, I have to admit that I’m not cut out for the rock n’ roll lifestyle.  After we got home I quickly got changed and within five minutes… well, hubby took this photo of me on the sofa that says it all… 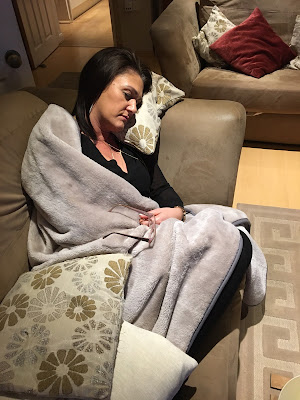 Posted by Corrine's Paper Crafts at 06:13