Ladies, How We Love Our Shoes!

What is it with us ladies and our shoes?  I can’t remember ever meeting a woman who wasn’t mad keen on buying shoes.  Working recently with some Tattered Lace shoe dies set me thinking about this obsession, and I did some reading about it online which I thought was quite fascinating.
You might not be surprised to hear that psychologists have studied why women love buying shoes. Apparently something called dopamine in our brains releases good feelings throughout our body.  Some people chase this feeling by taking drugs but incredibly, studies show that shopping, especially for shoes, releases large amounts of dopamine. 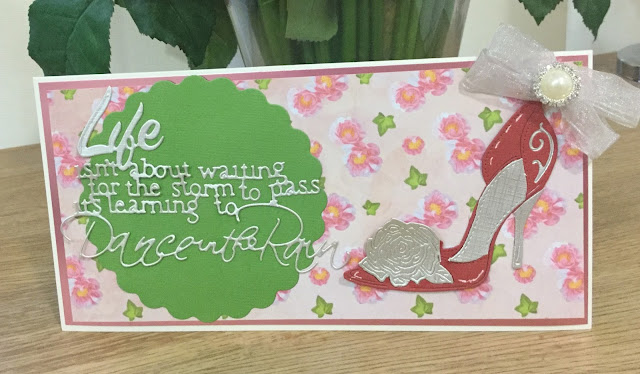 A few years ago, after months of nagging my hubbie finally decided to redecorate our bedroom when I was out for the day. This involved emptying our wardrobes.  He thought it would take just minutes to empty my wardrobe of my boxes of shoes and he’d stack them on the landing.  How wrong he was!  It took him ages!  He said he just kept going further and further into the wardrobe, pulling out shoebox after shoebox… any minute he expected to find himself in Narnia! By the time he’d finished there were boxes of shoes all over the landing, stacked on the stairs, and piled up in the hallway.  He was amazed as he’d always assumed I only had about half a dozen pairs.  I won’t say I was a secret shoe buyer, but I somehow always did manage to bring home yet another pair of shoes when hubby wasn’t around…! 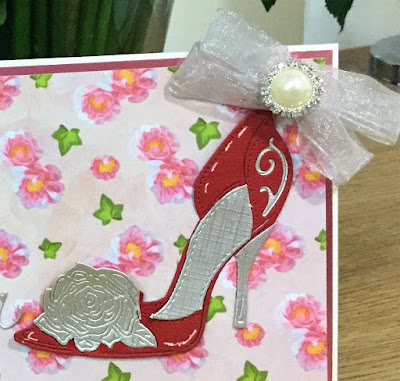 But it’s easy to explain away a large shoe collection – or so I read.  That’s apparently because shoes are a necessity. Boots are needed for when the weather turns bad.  Heels are needed for socialising and for special occasions, flats are needed because they’re so practical, and everyone needs trainers for exercise. So, that is four types of shoe we need, and obviously we need different styles and colours.  Suddenly it because quite reasonable for a woman to own twenty or more pairs of shoes.  In fact I read that the average woman owns at least ten pairs of shoes, and one in every twelve women have over one hundred pairs!

As for me, I have no idea how many pairs I own.  I’ve never counted them… I daren’t!
But some of us love shoes so much we even find room for them on our makes from time to time!

Posted by Corrine's Paper Crafts at 17:48